Bargaining Away the Constitution 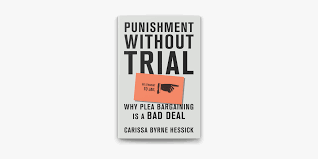 (review of Carissa Byrne Hessick's Punishment Without Trial: Why Plea Bargaining is a Bad Deal (2021)).

“Why does our system pressure innocent people into pleading guilty?” (P. 5)

When people think about how the criminal justice system works, they might think about a trial in a courthouse, with a judge, jury, lawyers, and a defendant trying to beat the case. While this might have been the expectation of the framers, or indeed how criminal justice worked at some times and in some cases, things are very different for most people encountering the system today. Rather than enforce constitutional rights to ensure justice is carried out, what happens today is pure injustice, characterized by individuals pleading guilty to crimes they did not commit, prosecutors leveraging powers and discretion against defendants, and judges and defense counsel who sometimes seem more interested in cutting and approving deals than seeing justice upheld. Rather than arriving at the truth, the system is obsessed with efficiency, with disposing of one case and moving on to the next. The reason innocent people are pressured to plead guilty, asserts Carissa Byrne Hessick, is “because everyone is pressured into pleading guilty. Ours is a system of pressure and pleas, not truth and trials.” (P. 5.)

Hessick’s Punishment Without Trial—Why Plea Bargaining is a Bad Deal argues our system is now designed to impose punishment without trial—a fundamental change to the very foundations of the criminal justice system. The book boldly calls out the constitutional sacrifices made in the name of expediency—and there are lots of them. For example, it is common for prosecutors and judges to impose a “trial penalty” on defendants, by which they give more favorable deals to those who plead guilty and free up the court of having to conduct a trial. In contrast, the defendant who goes to trial can expect to be charged with more crimes and more serious crimes, and handed longer sentences. The penalty effectively punishes a defendant for exercising the constitutional right to a trial by jury, which undermines the very purpose of having the right. But the possibility of more punishment isn’t the only pressure. The system of pretrial detention pushes people to admit guilt too:

For those people who are accused of low-level crimes, agreeing to plead guilty can mean walking out of jail that same day rather than sitting in jail for weeks, if not months, waiting for their trial to take place. Even if a jury eventually acquits them, they don’t get that time in jail back. We’ve managed to punish them before we convict them, so they might as well make that punishment as short as possible.

Efficiency guides the justice system at every corner, and plea bargaining is the result. The entire system is built around a model where only a tiny minority of cases ever go to trial, which, according to Hessick, means “we have given up on the search for truth itself.” Of course, it is not that the system is broken, but working as intended. Indeed, if more defendants took their case to trial, rather than the 2-3% who do, the existing system would come to a grinding halt. In other words, we can barely keep up with the very few cases that end up going to trial, which is why the current course of efficiency must be maintained.

In some instances, the systemic goal of efficiency permits charge bargaining and plea bargaining laced with corruption. The author cites the Jeffrey Epstein case as an example. Epstein’s counsel struck a deal with the federal prosecutor, avoiding a public trial. By allowing Epstein to plead guilty, the government denied the families and victims the ability to participate in the process and have their voices heard.

Because the odds are so stacked, and justice so underserved in these instances, Hessick offers several prescriptions for revamping aspects of the system to equalize the playing field. She suggests that one means of remedying the problem is to jettison some of the formalities that go into a trial. While it might sound counterintuitive to suggest that defendants will benefit from less formal trials, Hessick’s argument is that formalities tend to contribute to procedurally inefficient trials which, in turn, leave courts more dependent on plea bargaining.

But what, specifically, can help achieve this? First, the author advocates changes in pretrial detention policy. Too often, onerous bail practices or the inability to post bail makes the system more burdensome than necessary, and a defendant often must choose between freedom and taking a case to trial. Second, Hessick favors the elimination of extreme sentences, which give prosecutors too much leverage in plea bargaining. The ability to invoke mandatory minimums, Three Strikes penalties, and charges for crimes with extreme sentences allows prosecutors to forge bargains with frightened defendants who have little idea about the strength of the state’s case. Third, Hessick suggests not requiring defendants to show up for all pretrial court appearances. This revision would allow defendants to move closer to trial without having to endure so much inconvenience and expense. With such formalities relaxed, there would be more impetus for individuals to take their case to trial, since the cost-benefit analysis would not lean so heavily on the prosecution’s side.

For readers who are unaware that many are punished without trial, or worse, punished more severely for going to trial, this book will be an angering, eye-opening experience. For those familiar with some of these practices, it is a reaffirmation of much that is wrong with our overbearing criminal justice system. The work is commendable in that it takes both liberals and conservatives to task for helping to engineer this situation, and for ignoring the need to make the system more accountable. The text weaves together analysis and critique of multiple practices to reveal the true scope of the problem. The analysis also shines light on the desperation that the current system wreaks on people who get caught up in it. The book’s first chapter, with its powerful indictment of the current system, is destined to show up in college course readers and law school courses across the country.

This piece originally appeared at JOTWELL Criminal Law on 6/23/22.  You can find it here.